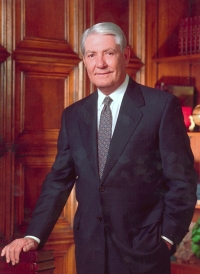 Charles has been the sole owner of Burford Corp. since 1995 and a part of the business since it began in 1961. A longtime resident of Dallas, Charles was a gifted inventor, successful businessman, and avid hunter. Charles is survived by three children: Lisa Ann Burford Fullington and her husband Dr. Richard Fullington, Elizabeth Burford Langford and her husband Robert Britton Langford, and Charles Elmore Burford II and his wife Erica Driemeyer Burford. Charles was a beloved grandfather to three grandchildren: Robert Brooks Langford, Elizabeth Brynn Langford and Amanda Leigh Burford.

In his lifetime, Charles was a member and active leader of several baking industry organizations including the Bakery Equipment Manufacturers Association, American Baker Association, and the American Institute of Baking. In 1976, Charles was appointed by the U.S. State Department to a delegation of food business executives who travelled to Poland, Russia, and Yugoslavia in a joint project with the U.S.S.R. Chamber of Commerce. In 2010, Charles was inducted into the Hall of Fame of the American Society of Baking. He was honored to be a member of the The Supreme Council of the 33rd and Last Degree of Current and Accepted Scottish Rite of Freemasons. Charles was also a proud member of numerous hunting and conservation related organizations including Shikar-Safari Club, Dallas Safari Club, Boone and Crockett Club, National Rifle Association, East African Professional Hunters Association, and Game conservation International.

Charles will be greatly missed by his family, his Burford family and numerous friends. His contribution to the baking industry and his commitment to quality baking equipment will live on through Burford Corp. for years to come.